Put your shoes on: We’re going on a journey. Walking boots if you have them, sports shoes if not. We’re going hiking.

It’s Friday lunchtime and I’ve planned every last detail. We are going down the River Rhine, in search of a Germany both forgotten and familiar.

For many years this was the face of Germany that most tourists got to see. Before the cheap flights for football weekends in Dortmund or shopping weekends in Berlin, this was what most visitors imagined when they thought of Germany. Cruise boats, castles, cuckoo clock shops as far north as Düsseldorf, black-and-white houses and Liebfraumilch wine.

These days it’s all very retro and not the young, multi-ethnic, dynamic country that the government wants to promote. Still the visitors come in their thousands.

It’s cliché, yes it is, but don’t worry: You won’t see any happy wanderers in leather shorts. These days the de facto German national costume is Jack Wolfskin. Oh and don’t expect to see any Liebfraumilch: It’s mostly produced for export. German wines are actually very good; unusual and mysterious reds, sharp and confident whites. The stuff you get in British supermarkets is for the tourists.

Liebfraumilch, the virgin’s milk of sweet wines, was for many years Germany’s unofficial ambassador to Britain. I remember a friend of mine’s girlfriend when we were at university together. Every time you asked her how she was, you always got the answer, “Oh, you know. I’m on the Liebfrau again”. Never “fine thanks” or “so-so”, always “I’m on the Liebfrau again.” She’d have to be to date my mate I guess.

When she answered the question she always had a bottle in her hand. Never a glass, always a bottle. I should point out that we always met at parties and never, for example, in a doctor’s surgery –but that’s the Liebfrau: rocket fuel for second-year philosophy students. Made in Germany. Of no interest to persons of quality. How times have changed.

So we set off. We take the train from Herne. We change at Duisburg and pick up the river. Our new train takes us south, past the commercial giants Düsseldorf and Cologne. Our next stop is much sleepier. We get off at Bonn.

Bonn is small and it is provincial. Cologne and Düsseldorf have wide, straight boulevards; Bonn has narrow, winding streets. But for many years Bonn was the country’s capital thanks to its first Chancellor, Konrad Adenauer. Adenauer was a local boy. He is Bonn’s second most famous son; the first is Ludwig van Beethoven.

Normally you think of Beethoven and you think of Vienna, but he was born here in the smallest room of a town house in the centre of the city. It is now a museum and it is touching. You can see his ear trumpets and his “dialogue books”, notebooks where visitors had to write down their questions to the great composer in order to circumvent his oncoming deafness. His last will and testament is here; there is pain in his  handwriting.

His life was not a happy one. Do you know why he settled in Vienna? He went to Austria to study and while he was there Bonn was invaded and occupied by the French. He never saw his home town again.

The house is filling up with a school party from France. They are wearing baseball caps, kicking each other and smoking in front of their teachers. The teacher excuses them in German, I reply “no matter” in French. We laugh. It is time for us to go.

We have one more stop: the Federal Quarter. We travel three stops on the tram. Between 1949 and 1990 this was the temporary capital of (West) Germany and you can still see the buildings used by the government in exile. Konrad Adenauer has long gone and so are most of the bureaucrats; it’s a strange place. The capital of a country which no longer exists. We take the next train.

We are heading south fast. The valley becomes steeper, castles begin to appear. Grapes can be seen in the vineyards, the local accent takes on a melodic lilt. We have crossed the state line. Welcome to Rhine-Palatinate.

The Rhineland is home to another retro Chancellor, Helmut Kohl. Kohl was born by the river and likes to come back here whenever he can. He famously took Margaret Thatcher here for a bonding weekend. Together they ate his favourite dish, pig’s stomach stuffed with potatoes and more pig. Thatcher hated it.

He wanted to show that he was the model European, here in his home at the heart of the continent. Thatcher’s comment? “That man is just so German.” For me, Helmut Kohl is a good metaphor for European politics: well-meaning but insensitive.

Do you know why he is so pro-European? He tells the story best himself. As a child growing up in the 1940s he was forced to fish out the bricks and stones from bombed-out buildings so that they could be used to build new homes. He was not alone: This was the experience of hundreds of thousands of Germans, mostly women and children. Kohl’s argument is simple: It must never happen again. We shouldn’t forget that.

We get off a Bad Hönningen. Now you can see black-and-white houses. Some of them are genuine, others fake, reconstructed after the Second World War. The Rhine was and is a working river, a legitimate target for allied bombers with few other targets left to destroy.

Today it’s a peaceful place. You’re looking at the cafes and the wine glasses, drops of water running down them, cool and refreshing in the hot sun. Too bad, we’re not stopping. We walk five miles on the flat then it’s up into the hills. The river has disappeared now; we are in the hinterland. The cafes here are closed; most of them permanently. The tourists don’t come up here, the local kids leave school and head for the cities. In much of Germany, land is cheap.

We pass the castle at Altwied. Fifteen miles and counting. You’re doing well. Nearly time to stop for something to eat. We reach the town of Neuwied.

You can have any kind of food you like as long as it’s not German: there are no black-and white restaurants here. Kebab houses and shisha bars they have. No place for wine lovers either, although the local kids are mixing the red stuff with coke outside a petrol station.

Hurry up, I want to watch the match. The biggest game of the year. In German we call it the Superclassico. Bayern Munich against Borussia Dortmund. The Star of the South thrashes The Pearl of the West 4-1. I am not happy and so we go to the Irish pub. Then to a kebab house.

Back into the hills we go. It is steep now, but the alcohol seems to be helping. These days my right ankle gives me trouble but today I’m flying. We are deep into the woods; there is nothing here but ourselves and the trees. We stop at Rengsdorf, a village with closed cafes and empty-looking black and white houses. We find a pub, sit in the beer garden, eat pig garnished with pig and listen to the birds singing in the trees.

We are in the Westerwald now, a region within a region, one that I’d never heard of before. Germany is full of places like this. Not many strangers come out this way.

Off we go again, through the woods past villages and white chapels. We are tired now. We head downhill. The river is in sight once again. We reach the town of Engers and sit outside a pub looking at the fairytale white baroque palace. The tourists have reappeared; you can have that wine now. We are going no further. Mission accomplished. The facet of Germany we have seen is old and it is clichéd but it has much to teach us.

I’d never heard of Engers before today but it’s a friendly place. The guy at the next table tells us that it has the highest fertility rate in the whole republic. He speaks as if he is personally responsible. If you want to meet characters in Germany, go out for a drink on Sunday night.

Sunday night? I hear you ask. Yes. Since you started reading this, two and a half days have passed and we are sixty miles from where we started.

That’s what the Liebfrau does to you. 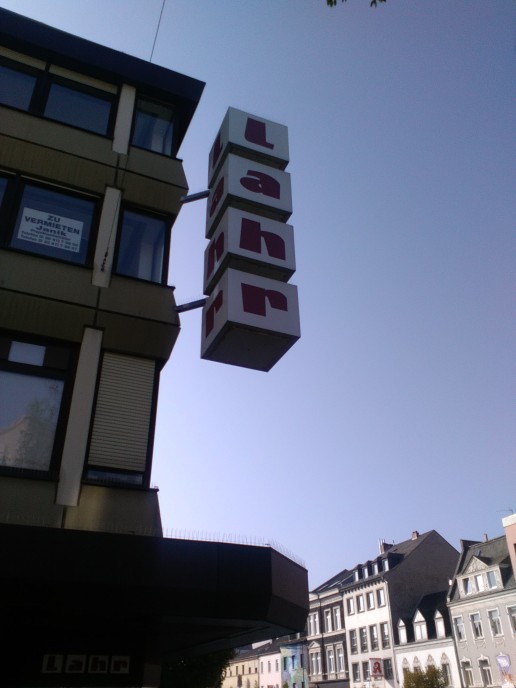